Double Award nominations for Set and Costume Design at 2022 Offies

Sorcha Corcoran, 2015 graduate of our Design for Theatre and Performance BA (Hons) course has been recognised twice in the 2022 Off West-End Theatre Awards nominations.

Sorcha Corcoran is an award-winning set, costume, and event designer who graduated from our Design for Theatre and Performance BA (Hons) in 2015.

Sorcha has worked with both the The Hope Theatre, on productions of 21 Rounds for Christmas and Fever Pitch, as well as with Southwark Playhouse on Salome, each of which won her Off West-End Theatre Awards nominations in 2022, including two nominations in the final round. The Offies recognise and celebrate the excellence, innovation and ingenuity of independent, fringe and alternative theatres across London. to have been recognised in both the Costume Design category for her work on Salome and in the Set Design category for 21 Round for Christmas is a fantastic achievement.

since graduating, Sorcha has used her skills in costume dye and breakdown, design sketching, technical drawing and props to secure work nationally and internationally, and is a season designer for Box Clever Theatre, as well as working regularly with London Bubble Theatre Company Young Theatre Makers. She’s interested in Community Theatre and Theatre in Education. Her work has ranged from set design for Peter Pan at Greenwich Theatre to costume and prop design for Macbeth.

Sorcha regularly employs and takes on placement more recent students and graduates from Rose Bruford College, keeping alive her connection to the course, and providing opportunity for the next generations of fabulous designers!

Cover image is of Britain Ltd at the Bargehouse in 2015, a production Sorcha worked on at Rose Bruford College. 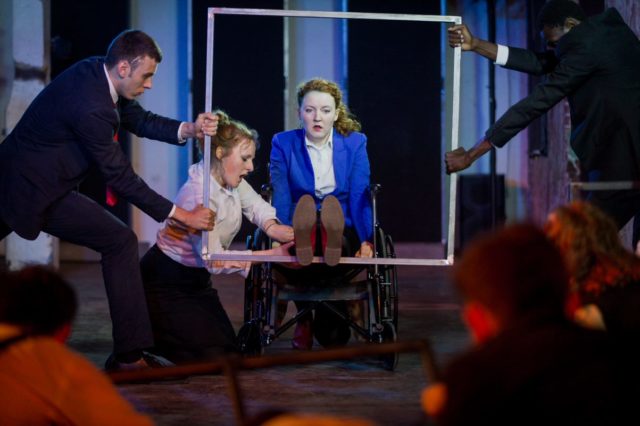