The College is saddened to learn of the recent death of Ronald Swains, one of its fellows and long-time supporters.

Ronald was in the first intake and the first group of Rose Bruford’s graduates in 1953. While at the College he played a number of roles under Rose Bruford’s direction, including in Ibsen’s Peer Gynt. After graduating with a ‘certificate’ from the then ‘Rose Bruford Training College of Speech and Drama’, Ronald bypassed the stage and followed a passion for recorded music by entering the record industry. He sold discs and became a buyer for a number of retailers. In 1963, he became ‘EMI Sales Person of the Year’. Alongside a successful career in the record business, Ronald pursued theatre working part-time with local drama groups through his county council’s Education Department, eventually teaching at Bucks College (now Buckinghamshire New University). At Bucks College he began to direct a range of dramas, operas, recitals, and musicals, eventually becoming a full-time lecturer in 1966. He served as Head of English and became a member of the Board of Governors. In addition, he was a tutor-counsellor for the Open University for 25 years.

Ronald was, by all reports, one of Rose Bruford’s favourite students, and the skills she instilled in him as a verse speaker were very evident throughout the rest of his long life. His passion for spoken poetry and prose remained unabated.

In the photo, Ronald Swains can be seen standing on the back row, fifth from the right. 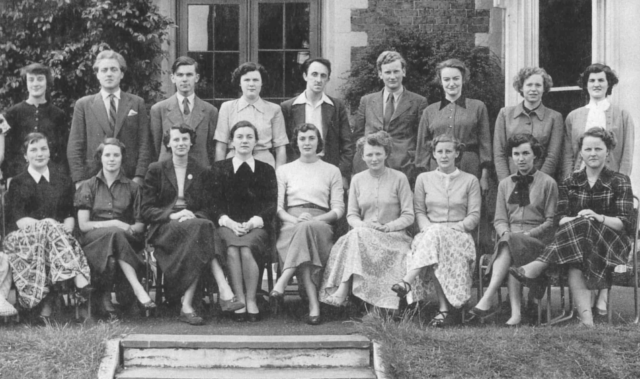